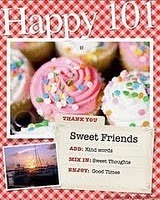 Deiala gave me this cute award, and there are some rules to go with it:

1. List 10 things that make you happy.
2. Try to do at least one thing on the list today.
3. List 10 bloggers who brighten your day.
4. Those of you to whom I give this award are to link back to my blog and perpetuate the happy with your own lists and recipients and whatnot.

10 Things That Make Me Happy

If those of you I’ve listed don’t get time to do this, I won’t be offended in any way.  Just know that you brighten the blogosphere for me and others!

My cookie jar post was featured on the WordPress Homepage today, and wow, did I have a lot of visitors.  Mom, don’t you feel honored that they loved your cookie jars that much?  Maybe you SHOULD hold onto them, after all!  🙂

Though if a hairy ear passes for bling, I don’t know if I want to be blinged out…

I have been negligent in mentioning a couple of awards that have (somewhat) recently been given to me.  The first is the “Honest Scrap” Award from Tara.  I am supposed to list 10 honest things about myself. So where’s the line between honest and TMI? We’ll see if I can toe it today.

1. I got new, kind-of-sassy underwear for Christmas. Husband is happy (see the 1 Cor. 7:5 Challenge button on the side? If you’ve not clicked it before, you should check it out. Your husband will thank you.).

2. I am quite near-sighted. My mother was shocked and appalled when she once accompanied me to the eye doctor and found out that my eyesight was, in fact, even worse than hers.

3. I birthed Anja with no drugs. I also tore a lot. It hurt.

5. I came across something even worse than this episode when Anja was about 9 or 10 months old.  Let’s just say it involved apparent “chocolate stains” around the mouth.  She apparently cannot be left unsupervised in her own room for longer than about 20 seconds.

6. I blame my husband almost every time we’re late getting somewhere, even if it wasn’t completely his fault.

8. I have regularly lifted weights since I was about 14.  Due to some rather heavy lifting when I was younger, my arms bulk up quickly if I lift too much.  So I’m stuck lifting small weights for a million reps unless I want to look like a (male) pro wrestler.

9. I have a hard time making and keeping good friends.  I often lament to Husband that I miss college, when the environment made it so easy.  We lived in community.  Moving to the Twin Cities has made it especially hard.  Someone might attend your same church but live 45 minutes from you, which doesn’t make for convenient play dates and get-togethers.

10. I have irrational fears that I don’t want to type out because Satan might read my blog.

The other award is this hairy ear from Lori:

Here is the story behind the award:

This is the Van Gogh’s Ear Award as created by Roger of Idaho Photo.

“Inspiration of the Van Gogh’s Ear Award”:
You may know the story of Vincent Van Gogh a well known artist in history. Although a brilliant painter in his later years went quite insane he received the nickname of fou roux (“the redheaded madman”). The most bazaar of Vincent’s behavior is when he cut off the lower part of his own left ear lobe, which he wrapped in newspaper and gave to a prostitute named Rachel in the local brothel, asking her to “keep this object carefully”. After this he suffered recurrent bouts of mental illness, which led to his suicide July 29, 1890 he was 37 years old. His works of art are priceless. “The point of this award” We are all artist in are own way be it art, photography, writing, philosophy, comedy, blogging and we all go a little crazy sometimes.

Thanks, ladies!  I appreciate them both–and you’re great, too!

And he couldn’t spell terribly well, either.  🙂

I got this great award from Jamie at ohbecareful.  Thanks so much, Jamie!  Your kind words meant a lot to me, as well as your knowledge of my love of cookies…

1. Gretchen at Lifenut.  Her story-telling ability always amazes me, and she has a great sense of humor.

2. Esther at The Mommy Diaries.  She has such a kind heart, and is constantly rallying prayer warriors for bloggers in need.  Never mind that she’s a Packers fan… 😉

3. Hibby at Hibby and Hubby.   She also has a knack for story-telling, and she uses big words, which helps me to learn new ones!  Plus she’s my dear friend.

4. Emily at Chatting at the Sky.  She is nothing but real about her life as a mother, a sister, and a tag-along to the Nester.  And in my opinion, she’s a pretty good decorator herself.

5. Heather of the EO.   Even though she’s on blogcation right now, Heather’s insights into faith and blogging have me hooked.

6. Jenni at One Thing.  Jenni has been nothing but encouraging and inspiring to me as a blogger and a friend.  Her birth stories are super-fun to read, too.

7.  Erica at The Hildebrand Happenings.  Her blog is private, so you won’t be able to read it, but she is an old childhood friend of mine, and I love reading about her life as a wife to a pastor and a mommy to a little girl.

I got two (count ’em, TWO!) bloggy awards this past week. Thank you to the kind Esther, who gave me this very sweet award:

Also, Joanna and Johanna at The Jos Know gave me this kind award:

Thank you, thank you (cuz there’s two of you)! This one has rules attached, but first I want to say that you’re going to want to go stop by both of the above-mentioned blogs and visit these ladies!

Now, the characteristics for the Smile Award are:

There are rules attached (I think I broke Rule #4…shh, don’t tell!). Here are the rules:

Phew! Stringent, eh? Here are 5 people (and I could name many more, but here’s the five who make me smile today) who I would like to pass this award along to:

1. The Nester, who inspires others by constantly looking for economical ways to make life beautiful, but doesn’t overreact when things get messed up (how can she with all those boys?)

2. Lori at Owed to Joy, because she keeps a positive attitude despite all she’s gone through, and she loves her kids like CRAZY

3. Paula at Amused Momma, who is always providing thought-provoking posts and info on homeschooling (also loves her kids–anyone spotting a trend here?)

4. Miz Booshay at Quiet Life, who makes us laugh and cry with her as she recounts her own adventures as a mother, home-schooler and photographer

5. Erica at Haphazard Happenstances, because she meets challenges head-on and tackles them (Make digital scrapbook papers! Lose weight and get buff! Ship off her youngest to school!) with a positive, can-do attitude

So if you aren’t already readers, 5 more blogs for you to love. 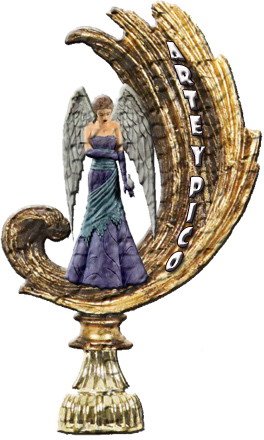 Albeit slightly strange-looking (it was started by an Uruguayan, Arte y Pico), I’m pretty excited to get my first blog award!  I can’t vouch for the rest of the content on that blog, since I can’t read it, but here’s what this trophy means:

What is the meaning of the expression? And basically, ironically, it translates into a wonderful phrase in Mexico, “lo maximo.” LOL! It will never find its counterpart in English, but if it HAD to, it would be something like, Wow. The Best Art. Over the top.

The lovely Wife and Mommy gave me this, and I’m very flattered!

The rules for this award are:

Mck Mama at My Charming Kids

Jenni at One Thing

Jamie at Oh Be Careful

Beck at Frog and Toad Are Still Friends

You guys are all great writers and some of you take great photographs to boot!  You inspire me to blog regularly and attempt to come up with better content myself.

"A perfectly kept house is the sign of a misspent life."

Promote Your Page Too